It happens that the dish does not turn as it should, although you have done everything according to the recipe. Of course, the products come across differently and so do ovens… But more often the problem is different. You need to learn how to cut the ingredients properly.

one. For soup: Cut a peeled medium carrot in half lengthwise. Lay the cut side down on a board and cut lengthwise in half again. Then cut across the slices with a thickness of no more than 2.5 mm. If the root is large, each half can not be cut in half, but in three parts – also together.

2. For pilaf: cut the peeled carrots crosswise into pieces 5-6 cm long, then along the plates 3-4 mm thick and then again along the strips 2-3 mm wide. 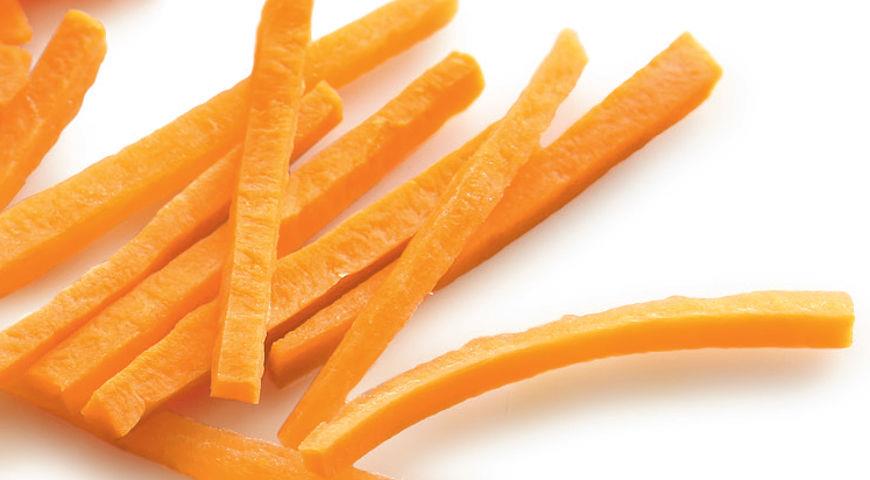 3. For vegetable stew: cut the peeled carrots into pieces about 3 cm long. Then cut each piece in half. Put the resulting halves on the priest and cut, as follows the arrow on the dial, measure the sectors in an angle of “5 minutes”. 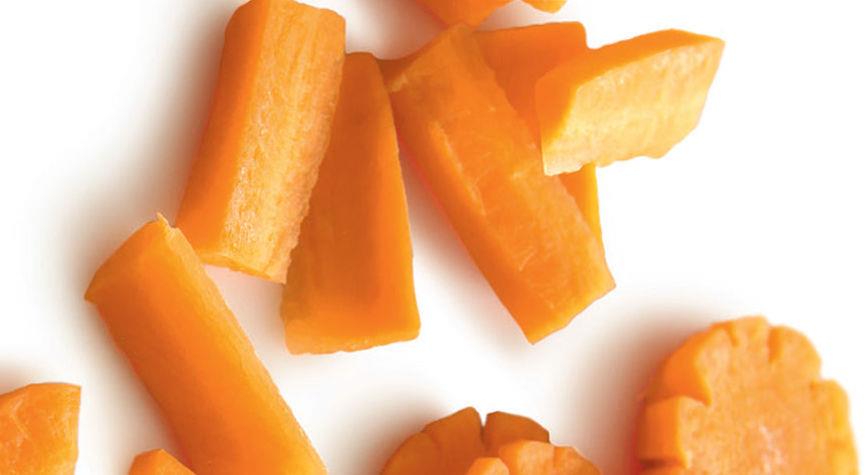 four. To fill in: cut longitudinal triangular indentations in the peeled root along its entire length, make two cuts at an angle to each other. There should be at least 5 such recesses, preferably 7. Then cut the root into circles – or rather, flowers, no more than 3 mm thick. 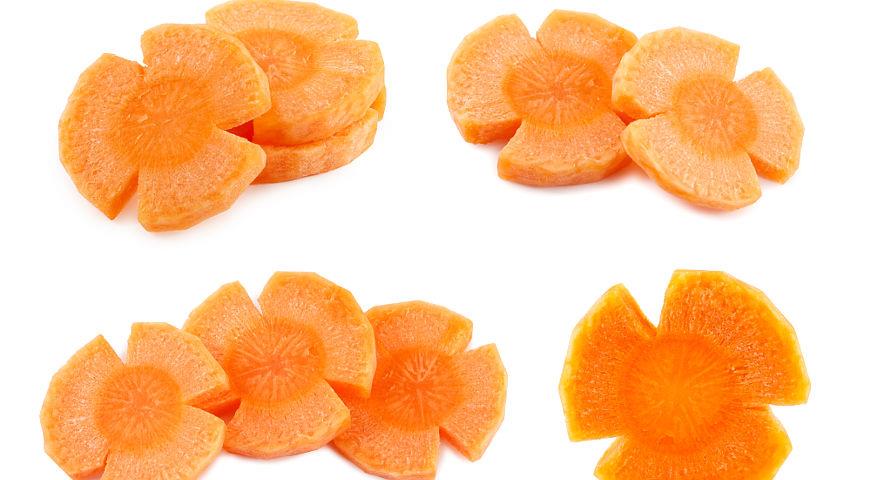 one. “Rustic”: cut the new potatoes in half lengthwise. Cut the halves lengthwise into 3-4 pieces to make slices. If the potatoes are large, cut the potato in half crosswise in half. 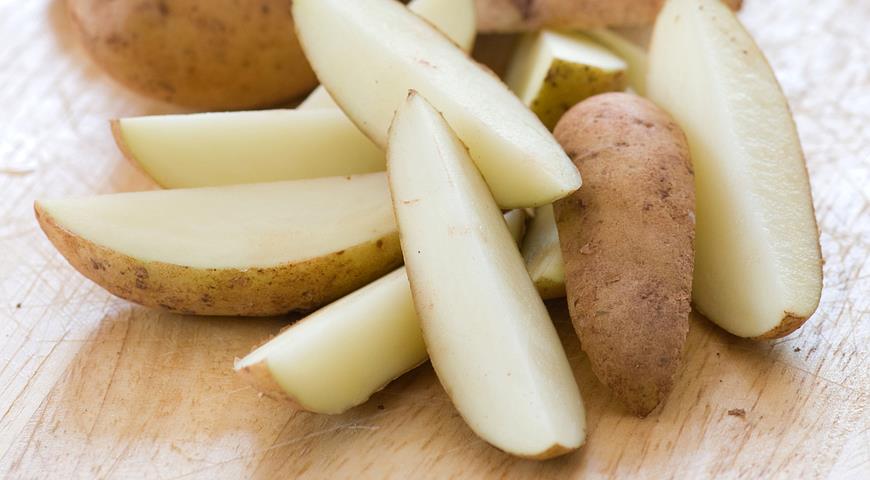 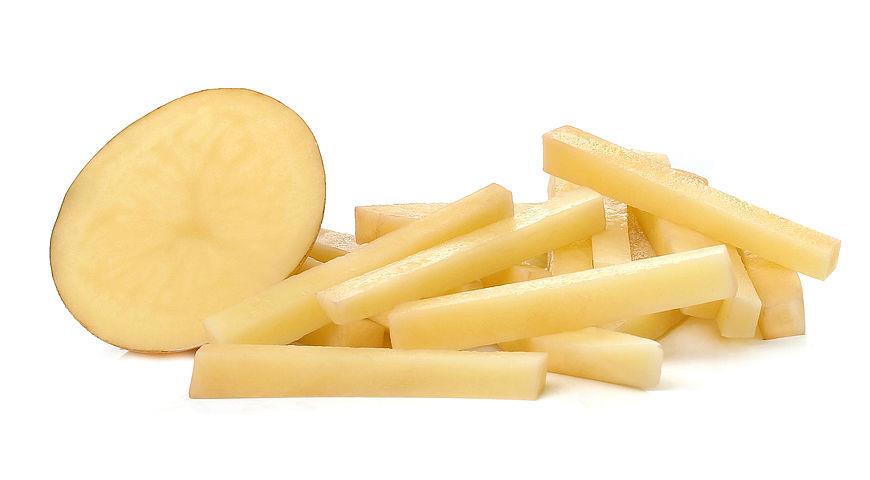 3. For soup: Cut a peeled potato in half, put it with the cut side down on a board and, holding the knife horizontally, cut it into slices about 1.5 cm thick. Cut vertically into 1-1.5 cm thick bars, then perpendicularly into 1.5 cm cubes. 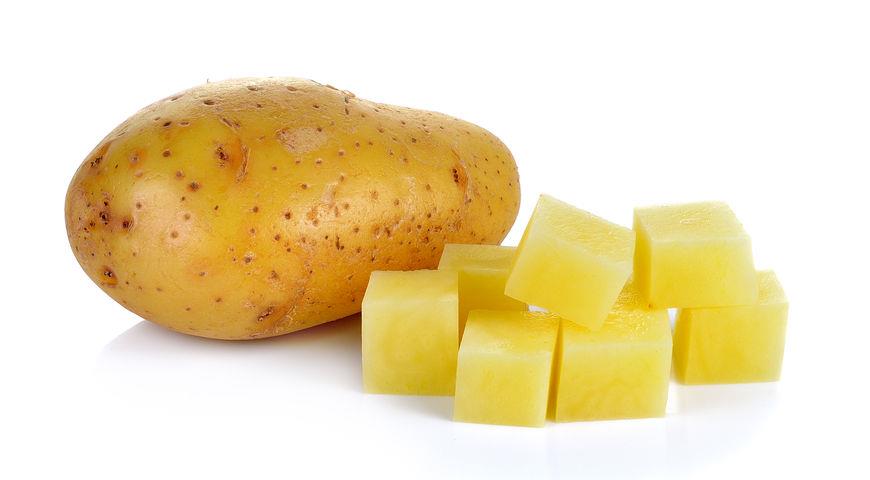 four. For potato casserole: Peel small or medium-sized potatoes and cut them crosswise into circles as thin as possible – maximum 3-3.5 mm. This is best done with a knife, on the blade of which there are small indentations, so that the knife does not “stick”. Alternatively, dip the knife frequently in warm water. 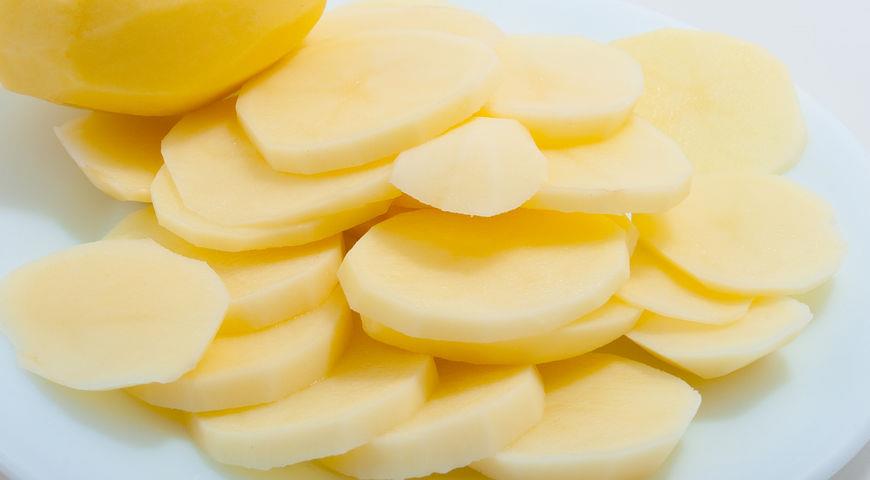 one. For salad: cut the “stump” off the onion skins – it’s too hard and tasteless. Cut the onion in half crosswise, lay it in place and cut each half in half lengthwise. Then put the knife in the middle of the vertical cut and cut, as follows the arrow on the dial, thin (2-3 mm) feathers. 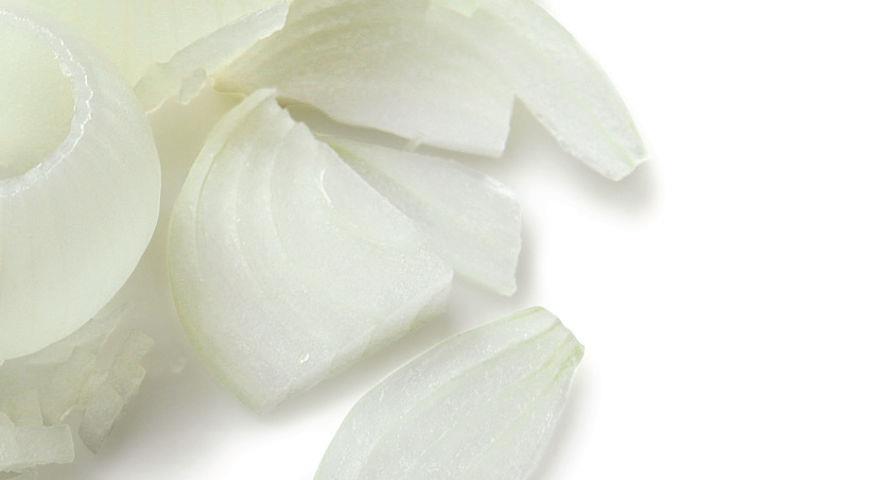 2. For soup: peeled onion, without cutting off the base, so that the half does not fall apart, cut in half. Hold the base and keep the knife parallel to the board, cut the half into 2-3 pieces, do not touch the base by 3-4 mm. Then, holding the knife perpendicular to the board, cut the onion into 8-10 pieces, not touching the base. Rotate 90° and cut into 3 mm pieces. Remove the uncut base. 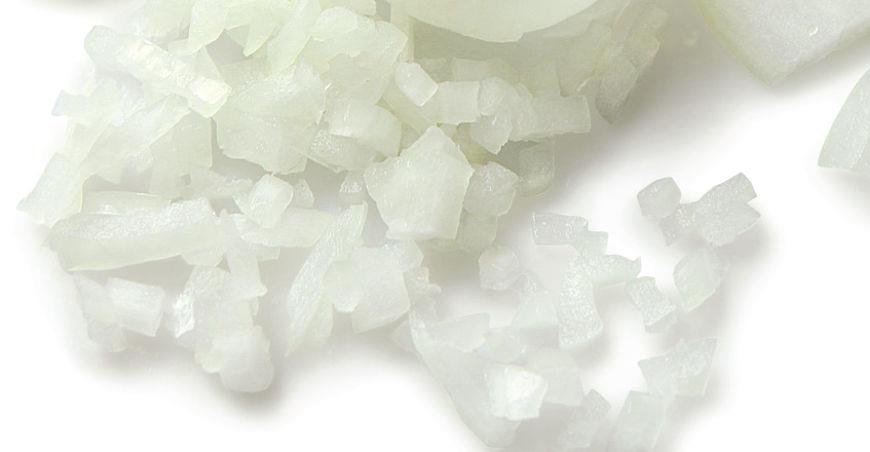 3. For the stew: peeled onion, cut from the “tail”, but without cutting off the base, so that the half does not fall apart, cut in half lengthwise, lay on the board with the cut. Keeping the base, cut it into half rings about 3 mm thick. If the onion is very large, cut it into quarters of rings – to do this, first cut the prepared half lengthwise right in the center, and do not reach the base by 3-4 mm. Remove the uncut base of the bulb. 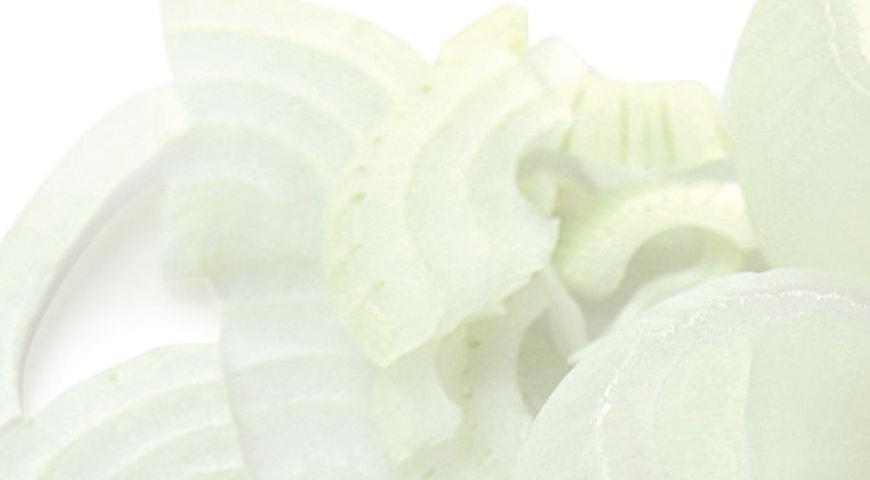 four. For baking: on the peeled bulb, cut off the base plus another 4 mm – so the bulb is a “cup”. Leave the bulb for 5 minutes. in boiling water, pat dry. With a thin knife or skewer, remove the narrow, dense center from the onion (it is not necessary). A space is formed in the center, which will allow, by slightly squeezing the bulb, carefully, without breaking, remove the “cup”.

one. For the pie: chop the cabbage in the same way as for sauerkraut, leave it on the board. When the board is full (or all the cabbage has been cut), turn the board 90 ° and cut the cabbage over the strips into small pieces, no longer than 6-7 mm. This can be done with a large chef’s knife, and also with a chopping knife or a special cleaver for cabbage. 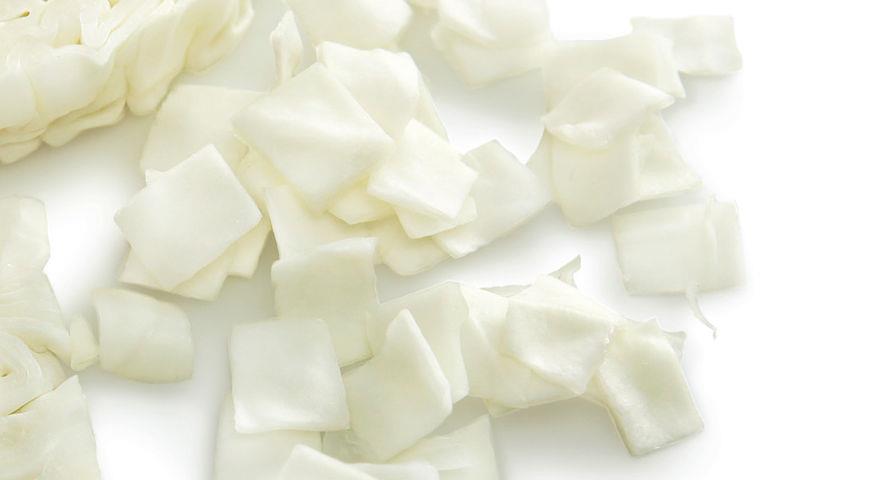 2. For Cabbage Soup and Fermentation: cut the head of cabbage in half lengthwise (large head – into 4 parts). Lay the cut side down and, holding the stem, cut the cabbage into strips 3 mm thick for cabbage soup and 5-7 mm for sauerkraut. Bypass the stump, turn the head of cabbage. If the strips are too long, cut them in half. All this is easily done with a large chef’s knife, a chopping knife or a saw blade with a vertical handle. 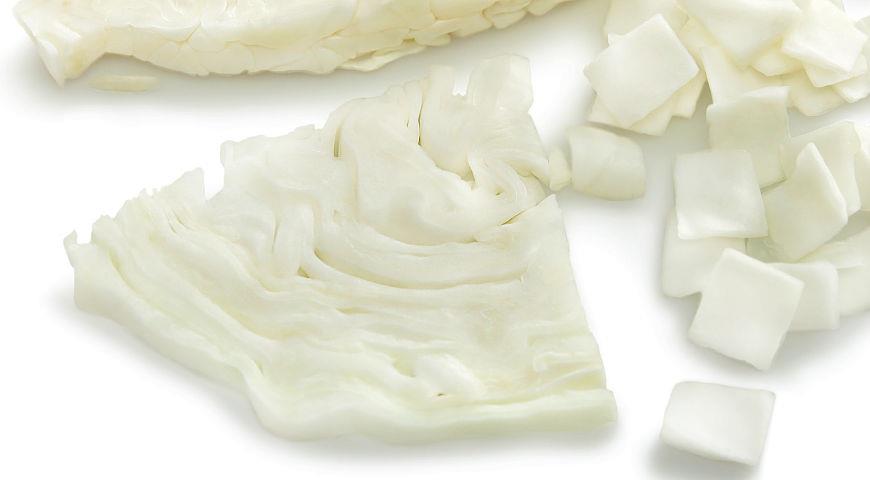 3. For deep frying: cut a small head of cabbage lengthwise so that the stem is cut right in the middle. Now cut the halves of the head of cabbage into sectors, holding the knife at an angle of about 30 ° – and be sure to leave part of the stalk in each sector – so that the sectors do not fall apart at further cooking. 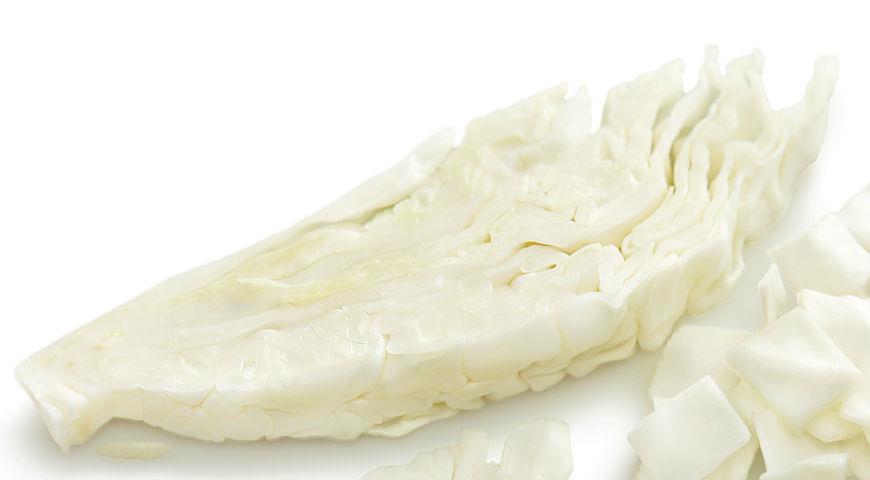 When cutting vegetables, the blade of the knife should be directed away from you, towards the work surface. You should hold the knife like this: the thumb is on the side, along or under the handle of the knife, and the index finger, together with the rest of the fingers, wraps around the hand from above (and does not lie on top from the edge of the sheet). When cutting, the tip of the knife should not come off the board, move back and forth. In this case, the “heel” of the knife will describe a circular movement in a vertical plane. The fingers of the second hand holding the product must be inserted.